After defeating all of the gang leaders from the surrounding schools, Ritsu feels omnipotent. And then, he’s confronted by none other than his older brother, Mob. Mob knew that Ritsu had wanted psychic powers for a while, so he congratulates him. However Ritsu doesn’t greet his brother with kindness. Meanwhile, a mysterious man watches the brothers from a distance. He easily manages to grab Ritsu, and tries to drag him off. Mob activates his powers in order to save his brother. 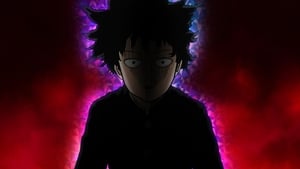